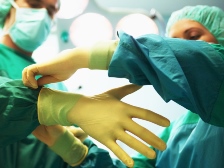 What we need are chains of accountability that link everyone in a hospital—from the board to the frontline staff—so that everyone has a shared understanding of their organizational goals, knows their role in meeting them, and gets feedback (such as dashboards) on how they are performing. Those organizations also need the internal capacity—health care professionals with the appropriate training—to carry out their roles in this chain. It sounds simple, but clearly it’s not. Over the past year, Armstrong Institute researchers worked with the VHA hospital engagement network on a demonstration project that sought to create those accountability structures at 10 U.S. hospitals. The initial results are encouraging, with 92 percent of participants reporting that they felt their organization has made improvements in targeted areas, such as surgical site infections (SSIs). It’s breathtaking what we can accomplish when everyone is working toward the same goal.Read More »Hospital-acquired infections: How do we reach zero?