Last Thursday, I made a presentation about patient safety to about 200 senior citizens at The Women’s Club of Chatham. My mother lives there, a picture-perfect town at the elbow of Cape Cod, with an old-fashioned main street that hosts a Fourth of July parade. For a while she had been asking me to give a talk to the group, and when she provided possible dates, I couldn't refuse.

When I told the audience that preventable patient harm is the third leading cause of death in the United States, the highly educated crowd seemed shocked, as if they just heard that their family was the focus of the latest town gossip.

But as usual, I probably learned more from them than they did from me. One by one, they told stories of harm: a granddaughter who died from a pain medication overdose; a spouse who died from a misdiagnosis; a women’s club member who suffered a blood clot that went to her lungs; a daughter who had multiple operations and still is very ill, a year after acquiring a drug-resistant infection.

Like many patients, they wanted to know how to select an excellent doctor and hospital. I emphasized the importance of doing their homework, such as finding out how many times the doctor or hospital has performed the procedure the patient is considering. I pointed them to several websites that post transparent, valid measures of patient safety and quality, such as the federal government’s Hospital Compare, Consumer Reports, the Leapfrog Group and some state health departments. We discussed how perhaps the biggest red flag is a doctor who does not welcome being questioned, is reluctant to seek a second opinion or doesn't encourage patients to participate in their care.

Beyond making their own health care choices, these women wanted to mobilize and raise the profile of the patient safety problem. One woman, a member of Grandmothers Against Gun Violence, asked if we could start “Grandmothers Against Preventable Harm.”

As we talked and their energy soared, mine did too, though with a bit of shame. These women want safe, patient-centered care and they are willing to advocate for it. Yet the patient safety movement has not mobilized this army, tapped their wisdom or channeled their energy. Today, fifteen years after the Institute of Medicine issued To Err is Human, this group was unaware of this report or the extent of the patient safety problem that it exposed. Perhaps they saw their own personal experiences with health care as aberrations or strokes of bad luck, rather than products of larger systemic problems. They all suffered alone.

Those of us leading patient safety have been too insular. We have talked to each other but not to the public. The victims of preventable patient harm often die silently, one at a time. With some exceptions, we don’t have the high-profile disasters that grab headlines and spur policymakers to take action, such as airplane crashes. And although this public health problem is equivalent to two Boeing 747 airliners crashing every day, research funding for improving the safety and quality of care delivery remains paltry.Read More »Grandmothers Advancing Patient Safety

Rethinking how we think about preventing harm 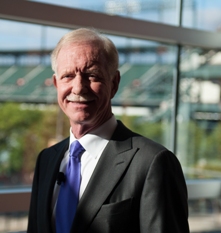 Captain Sullenberger shared lessons that health care can adapt from aviation at the inaugural Forum on Emerging Topics in Patient Safety.

Last week the Armstrong Institute, along with our partners at the World Health Organization, had the privilege of hosting more than 200 clinicians, patient advocates, health care leaders and policy makers for our inaugural Forum on Emerging Topics in Patient Safety in Baltimore.

The event featured presentations by international experts in a dozen different industries, including aviation safety expert Captain Chesley “Sully” Sullenberger, a former space shuttle commander and the chief medical officer of the Centers for Medicare & Medicaid Services. Other speakers shared their expertise in education, sociology, engineering, nuclear power and hospitality to see what untapped lessons such fields may hold for health care.

Their collective expertise was breathtaking. What was even more impressive was the obvious enthusiasm and spirit of collaboration embodied by a group joined by a common and noble purpose: to overcome the complex challenges that allow preventable patient harm to persist.

At Johns Hopkins, we’ve already seen what’s possible when health care adopts best practices from other industries. Our work to reduce central line-associated blood stream infections (CLABSI) presents a powerful example. By coupling an aviation-style checklist of best practices to prevent these infections with a culture change program that empowers front-line caregivers to take ownership for patient safety, the program, detailed recently on Health Affairs Blog, has reduced CLABSI in hospital intensive care units across the country by more than 40 percent. Similar results have been replicated in Spain, England, Peru and Pakistan.

That effort succeeded because we challenged and changed paradigms traditionally accepted by the health care community. We helped convince teams that patient harm is preventable, not inevitable. That health care is delivered by an expert team, not a team of experts. And, most importantly, that by working together, health care stakeholders can overcome barriers to improvement.

But if there are to be more national success stories in quality improvement, I believe the health care community will need to examine a few of its other beliefs.

Read More »Rethinking how we think about preventing harm